Table of Contents Hide
1 What is co-occurrence?
2 What is Co-citation?

Two new topics within the SEO community has centered on “Co-Citation” and “Co-occurrence”. Often discussed together, these concepts are similar in a lot of ways yet still very much distinct and different from each other. What is without question though is that the two concepts will be at the forefront of the next wave of changes in Google’s search engine strategy, with all algorithm updates giving center-space to both co-citation and co-occurrence.

Co-citation and co-occurence are the first real steps taken by Google towards what I have chosen to call a “nolinks” approach – an approach where backlinks are completely dismissed as a ranking factor. Russian search engine Yandex is already practicing the method for their top money keywords – they were simply forced to cause the high influx of spam. Google has been testing as well, but according to Google’s Matt Cutts the results were far, far less than good. Well, now let’s get going explaining these two terms.

Co-occurrence is a concept which refers to the common presence, frequency of occurrence, and close proximity of similar keywords present across several websites. Co-occurrence may include keywords that are similar to each other and based on the same topic, but are not exactly the same.

The idea of co-occurrence was born out of the observation that search engines throw out what they consider to be “relevant answers” to a query that is submitted by the user. So, when a website has a certain number of keywords for which the webmaster wishes to rank for, the search engines will seek out the site and display it on their results when the keywords of the site become “relevant”. After last year’s Hummingbird update, the focus of SEO specialists have been redirected to rank for concepts, ideas, questions and answers rather than specific keywords.

Amit Singhal of Google made a succinct verbal painting saying:

The future of search is to become that Star Trek computer, that perfect loyal assistant, that is there by my side whenever I need her. The trick to co-occurrence is that it is not fully dependent on links. Just great content with mentions of the keywords or the key phrases on the web pages can bring a website into prominence, even if it barely has any links at all. Besides the “relevance” of the keywords in search queries, co-occurrence is also said to occur when two or more search queries are made with similar terms. This is especially true if the terms are searched for consecutively.

Let’s consider an example. If a user looks for a term, say, “Ford Pinto Craigslist” and also looks for “used Ford Pinto car for sale”, Google starts interlinking the two terms, concluding that used Ford Pinto on Craigslist are what people look for when they search for Ford Pinto that are for sale. If a lot of people use these queries, then the link between the two queries is only enhanced and become related, even when used in different contexts by different search terms. In other words, a co-occurrence have occured.

The idea is not exactly new. Co-occurrence was first introduced by the Google Caffeine update 5 years ago. Matt Cutts correctly described the concept of co-occurrence then, without actually mentioning it by name, stating that Caffeine “allows easier annotation of the information stored with documents, and subsequently can unlock the potential of better ranking in the future with those additional signals.”

This was among the earliest acceptances of the fact that Google search technology, which had so far been based completely on links and link building, had been changing, and how important it was for SEO experts and analysts to get themselves acclimatized to these new concepts.

Finally, with co-occurrence being put on the fast track to approval by Google, its importance to SEO analysts will only increase greatly in the near and foreseeable future when it is expected to reach a high degree of sophistication, allowing Google to throw up far more relevant results. 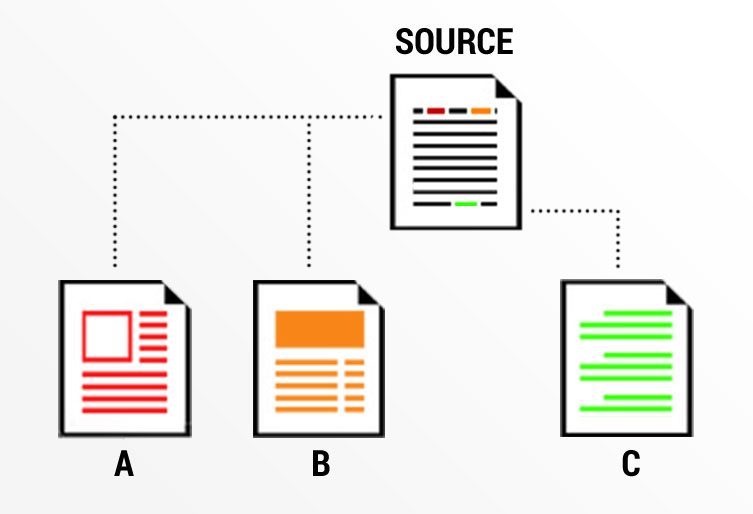 The source site mentions all three sites – A, B and C, which is why all four are related. A and B has a higher relation since they appear closer to each other and may also be more closely related to the source since they are both found in the beginning of the text.

Co-citation occurs when a website is mentioned, but not necessarily linked, by two different sources.
The term was first used in an SEO context by Moz founder Rand Fishkin, and it’s quite simple to understand. Google was based on the concept of linking one website to another, with sites that have a lot of backlinks rising up high on the SERPs.

Co-citation is a major change on that, as it requires a website to be cited or mentioned by two different sources without the compulsion of having a hyperlink involved. As more websites mention or refer to a particular site – not necessarily linking to it – its authority is established and it may rank more prominently in the SERPs. Also, co-citation happens even though the reference to the website is purely incidental or indirect.

Using Co-citation is one of the oldest tricks in the book for Blackhatters trying to fly under the radar. I remember how, as far back as 10-15 years ago, when people packed their (spammy) doorway pages with links to government authorities, universities, etc. just to avoid quick detection. Since Black Hat SEO is a short term game, you know that you could get wiped from the index at any given day, but with these kinds of tactics, you can expect your site to late a whole lot longer. In fact, I see the same happening a lot today, and the trick is the same, but with great and relevant content that links out to different kinds of authority sites. You can also benefit by linking out in the same way celebrities benefit by constantly mentioning other stars in order to expand their fanbase. If you can rub shoulders with thought leaders of your niche, you establish yourself as a significant member of the elite. Co-citation is also called by many observers as “link building without links”. There are two main ways in which two different sites are connected in a co-citation relationship.

To iterate, what co-citation does is to provide a signal to the Google algorithm that the mutually mentioned site is relevant and important. This now means that all the three websites, the one that is being mentioned and the two that mention it, are now symbiotically interrelated.

Few people have regarded “mentions” as a ranking factor, but it indeed is. Similarly, nofollow links will give your site cred even if no actual link juice is being transferred. This is yet another subject which I will get back to in a future article.

The significance of co-citation to search technology is that it serves as a possible replacement to anchor texts. While SEO analyst Bill Slawski was of the opinion that in spite of the increasing importance of co-citation, SEO analysts shouldn’t merely depend on it as anchor texts are still the deciding factor that is used by Google to judge its relevance.

Fact is, more SEOs are making serious studies of co-citation and co-occurrence due to the fact that Google has several times declared the diminishing value of exact keyword anchors. While yours truly hasn’t seen any significant change with regards to it at all, I am surely keeping it in mind while working.

There are many who appreciate co-citation as being the best thing to have happened to Google for a long time. One of which are those building “brands” that are now able to make an association without any hyper aggressive promotion – particularly since no links are needed for it.

What co-citation really does is to somewhat ”decrease” the importance of SEO techniques. A site may be ranking higher on Google by purely concentrating on creating great content that causes the site to be referred to by other websites.

Now, creating great content in order to get backlinks isn’t really new, but we all know that the adage “content is king” isn’t really effective by itself. The same goes for the principle of “build it and they will come” isn’t either, but the point is, they will certainly become more relevant when such strategies are practiced.

Ranking higher with a no links co-citation/occurrence approach will mean that newer or lesser known sites with excellent content may get the chance to rank high even if they don’t have a fulltime SEO/link builder working for them.