Before the May 2020 Broad Core Update was released, there have been talks about it among the SEO community. “Surely Google would not release an update during this time,” but lo and behold they have announced it on the 5th of May that left some of us dumbfounded on the results that they have received. The announcement has kept us on our toes as most updates go, they usually roll out during the first or second week of implementation.

With this in mind, I have constantly monitored my sites and my clients as well to see if any of them came out strong or if they have been hurt by the update.

Winners and Losers in the May 2020 Update

Before we get into the personal side of things, let’s look at the volatility of the search results since the update. 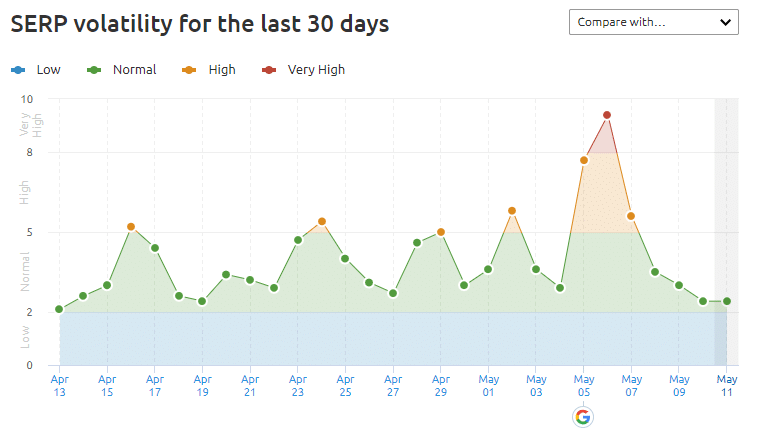 As you can see, the volatility of the search results is wild. Fluctuation is prevalent among sites and this has enjoined webmasters to stay vigilant on how to maintain steady traction or to recover from their losses. This is the perfect time to work on website fixes to see if you can hit that sweet spot that the algorithm will honor in the weeks to come. Since the update is still fresh and will not be fully rolled out until its 2nd week, this can buy you time to see what works and what doesn’t.

Anyway, I have told you that I have seen the effect on some of my client’s sites and I have found that winners are recipe sites, automotive industries, and e-commerce sites. For the health and news sector, there has been a dramatic drop. Before we discuss the winners and losers from this update, I would like to throw it out there that if your site has been affected by the update, it does not mean that your industry is targeted by the algorithm. This simply implies that updates have been magnifying their evaluation of sites continuously optimizing for search intent and relevance for search queries.

Moving on, here is what the data dictates for the sites I am monitoring:

This e-commerce client has been enjoying a ton of traffic and is one of the testaments that this lockdown is viable for digital marketing efforts’ contribution to businesses. It is now strong in terms of online visibility with results going as far as a 100% increase in traffic but with the core update, it is showing even more signs of an increase.

Recipe sites are also one of the winners during this core update and the site I am handling that mainly deals with recipes for their content has been positively impacted by the update. Compared to the previous period, there has been a 35.75% increase in users and 29.14% in sessions. This has solidified its place as a winner from this core update. However, there are some webmasters that are not so lucky, with some of them saying that their rich snippets have been removed resulting in a drastic drop in traffic.

The automotive industry has also shown significant results when it comes to traffic increase. Here in the Philippines, modes of transportation are at a standstill and this event affects user behavior in terms of looking for alternative ways to get around their location. Be that as it may, the update has been favorable to the sites for this industry. As you can see from the noticeable spike in traffic on May 5th, this site has also enjoyed a favorable appraisal from the algorithm broad core update.

We are moving over to the unfortunate few who have been hit by the update. The drop in traffic shown on these sites may be attributed to the core update, ranging from health sites to industry news sites. Let’s look at these losers from the May 2020 core update.

For a health site, it seems that it has been drastically affected by a significant amount of traffic shaved off during the first week of May. Traffic started slipping on May 5 and has not recovered since then. This is in comparison to the previous period wherein the site has experienced a steady stream of users going into the site. With the search algorithm clamping down on content pertaining to the pandemic, this may be another way for Google to evaluate the quality of health sites.

An industry news site is also affected by the update. The site maintained its strength in traffic up until May 9 when it started dipping and hasn’t increased since. Although the lost traffic is just a little over a thousand, it is still a significant loss for this site. 14% of traffic slipped away compared to last week.

The Core Update affects health sectors the most as Google continues to pay attention to news concerning the pandemic. It seems this is an urgent call to uphold the standard when it comes to search queries and remains faithful to giving the right answers to it. If people are looking for scientific explanations for information dissemination on the coronavirus, chances are, Google will honor content that is highly-reputable for this purpose. We are living in a time when misinformation can cost a life, so it is only admirable that the algorithm is constantly evolving to help champion this cause.

So far, have you seen the effects of the update on your site? Do let me know in the comments below.